Welcome to The Celtic Trust 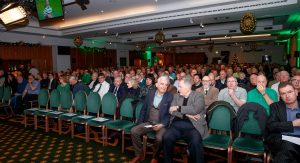 For many of us being a Celtic fan is a family and social tradition.
From parent to child, it was a rite of passage to attend your first match at Parkhead, first cup final or first league flag and many supporters answered the call and bought shares in the club in the 1990s.

While fans responded wholeheartedly to this, sales to the City and investment groups – such as our currrent principal shareholder, Dermott Desmond – far outweighed the shares bought by the individual fan.

Individual Celtic fans still hold a large number of shares in the club but two shareholders, Dermot Desmond and Lindsell Train between them currently hold over fifty percent of the shares.

The Celtic Trust exists to try to prevent any one person or group ever being able to take control of the club.

Our ultimate aim is for Celtic Football Club to be owned and run by its own supporters in the best interests of the team on the pitch and in line with the values and activities of its charitable history.

To that end the Celtic Trust also buys shares in the club collectively in the name of the Trust.
We can also act as a proxy for individual shareholders who can pass their voting rights to the Trust for Celtic PLC AGMs. As a democratic fan organisation, the Celtic Trust has regular face-to-face meeting with Celtic PLC where it campaigns on behalf of supporters and shareholders.
There is a minimum of four members meetings each year and an Annual General Meeting takes place in April/early May.
Subscription to the Celtic Trust is a minimum of £5 per month.

Join now and make sure your voice is heard.

Please add the site to your bookmarks now, and watch us grow.

Celtic PLC AGM – voting recommendations  If you are not going to attend the AGM in person, please proxy your

The Drive for Five

The dust has settled on another AGM….or has it?